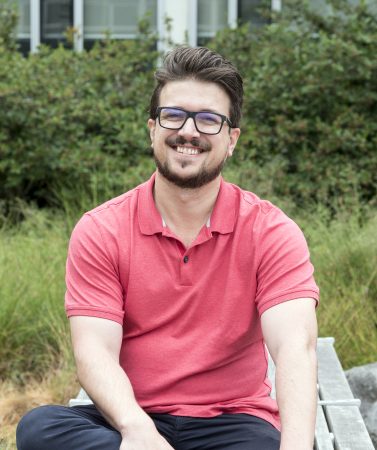 My most recent research is based in a specific question: how do we locate Indigenous literature, so often grounded in land, space, and place, within cyberspace, a space without place, a landless territory? Since it was first announced in William Gibson’s 1984 novel Neuromancer, cyberspace has provided—in both content and form—evocative ground for world building and storytelling from a wide range of authors. Indigenous writers and artists have made fundamental contributions to cyberspace from its inception, both in its development as a literary trope and as a medium to create and share stories. As a notional environment, however, cyberspace is still largely considered a space without place, which, for many, calls into question its applicability in Indigenous worldviews. Given the centrality of land in Indigenous epistemologies and the ongoing threats to traditional territory by colonial governments, precisely what a “landless territory” might mean for Indigenous writers is an evocative and pressing issue, particularly as more and more Indigenous authors take to the Internet to create and share stories. My work offers a critical yet affirming theorization of Indigenous cyberspace that emphasizes the work created by Indigenous storytellers, artists, authors, podcasters, and programmers. I argue for a more complex, nuanced understanding of cyberspace and illustrate the ways in which Indigenous new media artists are connecting it to land, place, and bodies.

Practice and pedagogy are also an important part of this work. I recently received a small grant to develop the “Empowering Indigenous Voices” initiative with CiTR—UBC’s campus and community radio station. “Empowering Indigenous Voices” is a collaborative project I developed in partnership with the Institute for Critical Indigenous Studies (CIS) and supported by CiTR to promote Indigenous perspectives and empower Indigenous and allied students through training and participation in broadcasting and multimedia initiatives. With the grant money we received this summer, an Indigenous Media Collective, led and managed by FNIS students will: 1) Produce a new generation of media makers with the skills, training, and experience necessary to critically and creatively address Indigenous issues at UBC and in Canada. 2) Improve UBC and Greater Vancouver’s access to locally‐produced Indigenous media through radio, podcasts, and public events featuring prominent Indigenous scholars and media makers from across Canada. 3) Generate a sophisticated set of resources for all students, faculty, and staff to productively engage the complexities of Indigeneity in the twenty-first century.

Students will contextualize and comparatively analyze Indigenous new media from 1990 to the present moment. New media is loosely defined as digital, interactive and/or networkable content that involves user feedback and creative interaction, such as net and video art, video games, Geographic Information Systems (GIS), interactive installation, podcasts and stereoscopic photography. Focus will be on Internet art and curation, interactive websites and audio maps. Students will develop and put into practice a set of skills for analyzing, comparing, researching and writing about Indigenous new media and produce a collection of digital stories. If you have any questions, feel free to email Dr. David Gaertner at david.gaertner@ubc.ca.
Prerequisite: One of FNIS 100, FNSP 200, FNIS 210, FNSP 210, FNIS 220, FNSP 220 or instructor permission.
Term: 2

Applied research/community oriented project designed and implemented in collaboration with student, faculty and Aboriginal community organization. Emphasis on examining ethical issues and developing culturally respectful and academically rigorous forms of research. Credit will be granted for only one of FNIS 400 or FNSP 400.Pre-requisite: Either (a) all of FNIS 310, FNIS 320 or (b) all of FNSP 310, FNSP 320. (Students must pass FNIS 320 or FNSP 320 with a B- or higher or request program approval.)Term: 1-2

Gaertner, David, The Theatre of Regret: Art, Literature, and the Politics of Reconciliation in Canada. UBC Press, 2020.

“A Landless Territory: How Do We Articulate Cyberspace within the context of Indigenous Studies?” Learn, Teach, Challenge: Approaches to Indigenous Literatures in the 21st Century. Eds. Linda Morra & Deanna Reder. Waterloo: Wilfred Laurier UP. 493-498.

“‘Redress as a Gift’: Historical Reparations and the Logic of the Gift in Roy Miki’s
Redress.” In Tracing the Lines: A Symposium to Honour Roy Miki. Eds. Christine Kim, Maia Joseph, Larissa Lai, and Chris Lee. Vancouver: Talonbooks, 2013. 67-75.

“Here Comes the Neighbourhood: Encountering the Problem of the Neighbour in Space.” Co-authored with Jason Starnes. West Coast Line 73 64 (2012): 4-9.

“‘The Climax of Reconciliation’: Transgression, Apology, Forgiveness and the Body in Conflict Resolution.” Bioethical Enquiry 1.1 (2011): 245-56.

Monographs
The Theatre of Regret: Troubling Reconciliation in Canada. UBC Press (in production).

Commissioned Writing
“Back to the Future: Sovereignty and Remediation in Skawennati’s Timetraveller™”.
Commissioned by the Dunlop Art Gallery. Regina, Saskatchewan. October, 2015.

Never Alone: Resources and Reflections: I designed this website as a resource for students and researchers investigating the Inupiat video game Never Alone. It features links to resources for the game and the Inupiat community as well as essays by Indigenous studies scholars produced specifically for the site. A number of professors now use the website in their classes and I continue to add essays and resources written by colleagues and students. https://ilsaneveralone.wordpress.com/

Symposium for Indigenous New Media. This website was created as a resource for the Indigenous New Media Symposium, a two-day event held on the traditional territory of the WSÁNEĆ (Saanich), Lkwungen (Songhees), Wyomilth (Esquimalt) peoples of the Coast Salish Nation as part of the 2018 Digital Humanities Summer Institute (DHSI). The symposium was a starting point for an extensive capacity building and knowledge mobilization project at DHSI that will include the production of best practice materials and models to support Indigenous peoples and research in the digital humanities (DH). It remains online as a resource for students and researchers: https://indigenousnewmedia.wordpress.com